If you nodded at the question posed by this post’s title, then you’re in for a treat. Not only do you get one fantastic thing, but four – thanks to the new trailer for the imminent ‘The Fantastic Four’ reboot. Superhero nerds everywhere, do your Tuesday jive dance boogie!

I can’t say I’m the authority on the Storms and co., never having encountered the comics or caught the Alba/Evans-starring footnote and its sequel back in the noughties. Back in 2005 of course, not every superhero had to brood and act all taciturn in the shadows quite as much, and this trailer concerns me slightly in that it looks like just any other Nolan-indebted gloomy origin story.

However, with its not-obvious cast choices and a director who has form in directing unusual superhero fodder (Josh Trank previously directed the shaky-cam ‘Chronicle’), this could be a smart move from Twentieth Century Fox, banking gold at the box office with a super collective to rival their ‘X-Men’ franchise. So confident are they, that a 2017 sequel is already in the works… wonder what Marvel Studios are thinking, hmm?

The kind – and very cool – folk at SelfMadeHero have handed over a nifty prize in the shape of graphic novelist Frederik Peeters’ brand new book ‘The Invisible Thing’, the second instalment in his sci-fi-fantastic series ‘Aama’.

The planet-hopping space epic follows amnesiac hero Verloc Nim, his brother Conrad and robot ape sidekick (as ya do) Churchill as they journey into the unknown on a strange desert planet. Combining the philosophical fantasy of K. Dick and Kubrick, along with the impressive world-building of ‘Avatar’, Peeters’ series could very well be your next favourite science fiction fix. Already a winner of the ‘best series’ award at Angouleme festival in 2013, ‘Aama’ is a five-star “incredible saga” [Sci-Fi Now]. 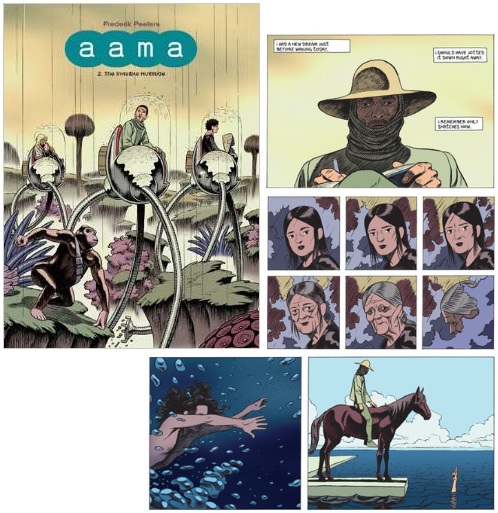 So, how to be in with a chance for this graphic novel greatness to be your very own?

2) Retweet any one of the giveaway-related Tweets I’ll be sending out over the next couple of weeks.

Prize Giveaway Terms & Conditions
Prize giveaway open to anyone in the UK aged 18 or over. Entry closes 11:59pm on 03/12/2014. One winner will be chosen at random and notified shortly thereafter via Twitter, whereupon a postal address for delivery of prize will be requested. Entry method as described above: to be considered eligible, you must follow @nicetogeekyou on Twitter and have retweeted at least one of the daily @nicetogeekyou tweets promoting the giveaway. The prize is as stated, with no alternative offered unless the advertised prize becomes unavailable. If a response is not received from the selected winner within 7 days, that winner will effectively forfeit his/her prize and another winner will be selected in his/her place. Entry constitutes full and unconditional acceptance of these Terms & Conditions.

Ever wondered what ‘Die Hard’ would have been like if it was set in Disneyland? Well, thanks to recently published graphic novel ‘Ricky Rouse Has a Gun’, you no longer have to. Sorta.

This rip-roaring yarn is a deviant little book – in all the best ways. Jörg Tittel and John Aggs have crafted a satirical story with bite in it’s hero’s mousey teeth: not to mention gunfire and bloodshed in abundance. Despite its central character’s, erm, resemblance to a famous mouse, this is definitely not bedtime reading for kids. 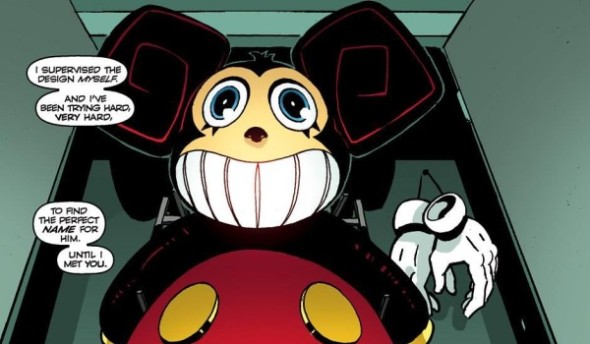 So, what’s the story? Down-on-his-luck soldier Rick is lying low in Shanghai when he crosses paths with Hucheng, an entrepreneur who owns a Chinese theme park that is decidedly similar to the US’s most culturally significant amusement parks. Out of the job and desperate to support his estranged daughter, Rick becomes ‘Ricky Rouse’ and joins the park’s existing staff, all of whom are versions of some of the world’s most familiar fictional characters.

However, when a rogue band of costumed creeps take the theme park hostage on Christmas Day, Ricky Rouse has to come to the aid of both its patrons and his visiting family. Cue bullets and ultra-violence – happy Christmas!

As well as sly political undertones regarding Western-Chinese relations, the commentary on attitudes to political property is defiantly on-the-nose. Above all though, it’s a fun romp with a wicked streak of anarchic humour, Tittel’s snarky dialogue backed up by Aggs’s blood-soaked, rampaging visuals.

Published by SelfMadeHero, ‘Ricky Rouse Has a Gun’ is available now – and just waiting to give you a good time.

When pop meets culture, you get heroically good art work like that created by Brian C. Roll. The New Jersey artist and all-round creative brain may not have prints from his portfolio hanging in The Louvre but, if you register even just a #1 on the geek-o-meter, you’ll agree that this guy’s skills are super – just like his subjects!

Brian’s Odyssey Art site collects together his ‘who’s who’ gallery of pop culture icons, many of whom will be familiar to all you genre junkies, but all in his own unique artistic style.

Thinking about doing some interior decorating? Luckily for those of us who don’t have his skill with a line, some of Roll’s most eye-catching work (including the Serenity crew above) can be bought from his online store.

And that’s not all. As his interpretations of classic pop culture heroes would suggest, Roll has a distinct eye for character and his very own good and bad guys will be discovered soon when his forthcoming Kickstarter-funded project ‘The Circle’ comes full circle. Can’t wait!

Stuck in supposedly ‘stop-gap’ jobs and slumming it in their house-share with red wine and ‘Come Dine With Me’ repeats, the trio of pals attempt to relive the glory of their uni days with an impromptu house party attended by the local so-hot-right-now indie rock band. What could possibly go wrong?

Nailing the sense of apathy, disillusionment and general feeling of ‘what do I do now?’ experienced by many a twentysomething in the haze of post-uni days, comic book artist and writer Rachael Smith is on to a winner with her first graphic novel proper ‘House Party’.

Smith’s story is short, but in just 100 pages she fits in enough canny characterisation, snarky jokes and kickass art to make this party one worth attending. Her cast of goofy, geeky misfits are drawn in a cute, colourful way that recalls the indie hipsters of Bryan Lee O’Malley’s ‘Scott Pilgrim’ series (Sonic Youth tees abound!) but the voice is defiantly British; while her characters may fling about ‘douchebag’ as an insult, they’re also happy calling things ‘minging’.

With a bittersweet ending that leaves the door open for more encounters with the gang (I especially wouldn’t mind seeing what tequila-swiggin’ bezzy friend Siobhan gets up to next), ‘House Party’ is a short but sweet, perfectly formed triumph.

Find out more about Rachael Smith and ‘House Party’ via her blog or track her down on Twitter. Can’t wait to see what she does next!

Surely, it’s common knowledge now that ‘comics’ aren’t a) for kids and b) necessarily comic. Thanks to the post-‘Dark Knight’ Nolan era, comics and graphic novels are being consumed by more adults than ever – and not just those featuring guys dressed in spandex.

If you like your graphic novels more twisted than comical, then Think Publications have the perfect tales waiting for you. The ‘Twisted Dark’ series gathers together short stories that all deliver a sharp sting, as evident in the first anthology ‘Volume One’ which I had the pleasure of sitting down with this weekend – although, of course, it was a delightfully twisted version of pleasure.

The first set of stories balances the blackly comic (‘The Game’) with the downright menacing (‘Blame’) and even controversial (‘A Heavenly Note’), the unsettling tone making for a read that won’t appeal to all. However, if you’re in the mood for something different and daring, then this is definitely worth your time; any publication that risks it all with a strip like ‘Routine’, which goes to some VERY dark places, gets my vote.

You’re in luck too if this is your kinda thing. Neil Gibson’s offbeat tales (which are accompanied by startling monochrome art, by the way) continue in further volumes which promise to connect various tales in all sorts of surprising ways. Why not take the chance and get twisted??

EEK! Who knew, back in the hazy teen telly days of 2004, that OC bad boy Ryan would turn out to be Commissioner Gordon?

Batman-verse TV spin-off ‘Gotham’ has been granted a full series and, as if in celebration, the first full trailer has landed online. It’s still early days of course – and still so soon after Nolan’s rendering of the Bat’s city (and not too far ahead of Snyder’s dance with the Bat) – but the first glimpse is promising, offering up a rogue’s gallery of some of Bruce Wayne’s deadliest foes back when they might have been redeemed.

Indeed, it looks set to follow the same origin-opening trail currently being trod with great wit by ‘Bates Motel’ and ‘Hannibal’ – but neither Norman nor Lecter live in Gotham, do they? With Gordon as the focus, a great entry point for the everyman, then this could potentially run a good few years with so much love for DC’s Dark Knight…

Are you the kind of gal/guy who turns up at a house party with a comic book in tow?

Thankfully, graphic novelist upstart Rachael Smith is coming to your aid this summer with an original comic that brings the party to inked panels.

Written and illustrated by Rachael Smith and published by Great Beast Comics, ‘House Party’ marks the graphic novel debut of award-winning Smith who has already gained great reviews from the likes of Forbidden Planet.

Think ‘Scott Pilgrim’ by way of a British ‘Girls’ for a story that follows three 20-somethings Michelle, Siobhan, and Neil, who are having trouble adapting to post-grad life in the real world (ugh). A massive house party – like back in the uni days – will surely solve all their problems… right?

Rachael Smith has previously released ‘The Way We Write’ and ‘I Am Fire’ through David Lloyd’s digital publishing company Aces Weekly. Her smart, sassy style is sure to result in one of this summer’s must-reads – and a reason to party, for sure!

Preorders for House Party are open on the project’s Kickstarter page.

I don’t live in London, which is why I don’t own a ticket to the sold out ‘Comic Connections’ event at the British Library this May, which brings those three favourite things together. Ergo: I’m going to cry over my copy of ‘The Sandman’ now.

The Friday night session, which precedes ‘Late at the Library: Comics and Music’ (set to feature an appearance by Gaiman’s wifey Amanda Palmer), will team up fantasy writer Gaiman to converse with the Cornflake Girl to talk all things comic book, as there’s is a friendship based on a mutual admiration for each other’s work which has culminated in Gaiman writing flame-haired graphic novel characters and teaming up with Amos on her ‘Comic Book Tattoo’ anthology.

Sounds like a geek dream. Someone send me an inked and panelled postcard??

Comic book fans can look forward to a cinematic calendar catering to their colour strip tastes in 2014, but a return to the monochrome world of the ‘Sin City’ sequel ‘A Dame to Kill For’ stands out already in its newly released trailer.

Booze, broads, blood and barnstorming B/W action – will you be visiting Sin City this summer?